Shower valves are mainly used to control the flow of water which is similar to the tap on your basin. There are mainly two types of shower valves in consideration but they come in a variety of styles to match a whole host of shower fittings.

So to find out the perfect one which complements your bathroom is simple. But you need to have enough knowledge to find the best shower valve for you. You have to know about the materials used to build the shower valve, their quality, durability and so many.

If you want to pick the ultimate shower valve for you then you need to analyze lots of things which is time-consuming. But you don’t need to worry much about this because we already did the part for you. After doing some profound research, we have enlisted some of the finest shower valves on the market. At the end, we have also discussed some buying tips which will help you to choose the best shower valve for you. 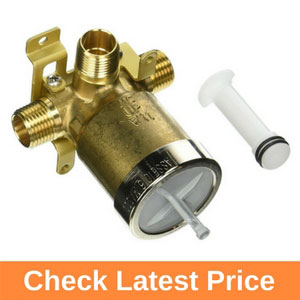 Delta R10000-UNBXHF can be used with showers only. This valve does not have an outlet which can be used for tubs. It also includes drain assembly system. Although it can be used for shower only yet it has high flow.

It has also a unique system which allows you to easily change the function, style and appearance of the shower and you don’t need to alter the plumbing behind the wall for this. This valve has a dimensions which is 2.5″ long and 4” wide. It’s diameter base is 1.34375″ and has an overall height of 4.5″ from top to bottom. Flexibility is the best facility you can get from Delta R10000-UNBXHF Multichoice Universal valve. 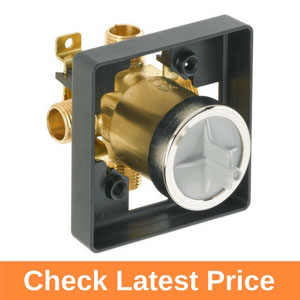 Delta Faucet R10000-UNBX Multichoice Universal valve body can be used for both tub and shower. It is mainly made of brass and its dimension is 4.9 x 5.1 x 4.9 inches. Single, dual, or dual thermostatic cartridge is accepted by this valve. The type of their valve is only valve body. They sell the trim separately and appropriate cartridge is included with it. It has also got back-to-back capability. And the most interesting thing about this valve is that you can easily fix the changes without behind-the-wall plumbing alterations. 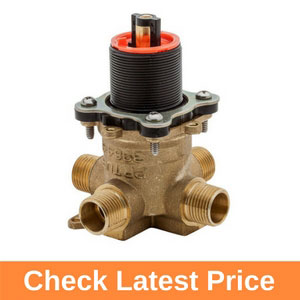 You can use Pfister 0X8310A OX8 Series valve for both tub and shower. It’s installation process is very easy. This valve is basically made of solid brass with durable brass stem. Its dimension is 0.1 x 7.6 x 7.8 inches. It also includes Pforever Seal which is a Ceramic disc valve technology and plug which can be used for shower only. This valve has also got dual 1/2” I.P. or 1/2” Copper Sweat Connections. Pfister 0X8310A OX8 Series valve also includes rough in valve and pressure balance cartridge. The plaster guard cap is the main attraction of this valve which ensures you to keep a large enough opening after installation by attaching the guard cap before installation. 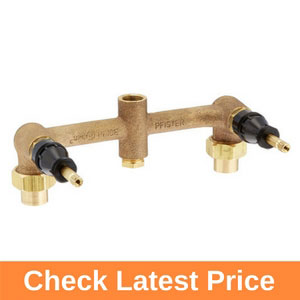 Pfister 00731XA 2-handle shower only rough-in valve can be used for hand showers. The valve is made of solid brass and its dimension is 0.1 x 8 x 10.6 inches. When you buy the product it comes with only the valve. It includes union nuts which are 1/2″ Union Inlets and 1/2″ I.P. Outlets. The shower valve is mainly unfinished 8-inch fixed cast brass valve body with copper union adapters. It has 2-hole installation which makes it more easier to install the valve. 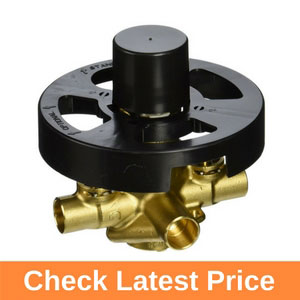 The Moen Rough-In PosiTemp Pressure Balancing Cycling Shower Valve with Stops will ensure you a generous flow of water. The Moen M-PACT common valve system allows you to make style updates any time in the future and you don’t need to replace the plumbing to make changes. The valve is made of brass. The Rough-In 2570 has PosiTemp technology which helps to maintain water temperature while showering. The four-port, cycle valve also offers an adjustable temperature limit stop so that you can control maximum hot water temperature. On the other hand, its 1222 cartridge accommodates back-to-back installations. The installation process of this valve is so easy.

As I have told you earlier that there are two different types of shower valve available in the market which are thermostatic shower valves and manual shower valves. So you need to know about the differences between them so you may choose the suitable one for you.

Purpose: The purpose of Thermostatic shower valve is to maintain the temperature of water whereas the purpose of the manual shower valve is to control the temperature and water flow in the same way like the tap on a sink. In case of Thermostatic shower valve, if someone turns on the flush or tap anywhere in the house you will not experience any scalding or freezing blast. On the other hand, in case of manual shower valve, if anyone turns on a tap elsewhere in the house you can experience scalding or freezing blast.

The system of Work: Thermostatic Shower valve’s system of work is automatic. Once you have set the temperature at a specific level then after that you don’t have to worry anymore. Because it will stay in the same position until you change it. But in case of manual shower valve, on the contrary, isn’t much stable. Water may turn dangerously hot all of a sudden.

Design and Color: Shower Valves are available in different colors and designs out there. You can purchase starting from basic no-frills design to models supporting exotic builds. There are some tailor made valves too which will fit in specific decoration. But the decorations and designs are all up to you. You have to choose the one which is suitable for you among these various varieties of designs and colors.

Size of the Valve: Regarding the size of the valve many people make mistakes. They pick up the wrong size and then they seek for return policy which is quite a hassle. So to avoid all these, you should determine the size and choose the right size that perfectly suits your bathroom.

Suitable For: Thermostatic Shower Valves are suitable for those who prefer highly contemporary design. But if your budget range is low then a manual shower valve is suitable for you.

I hope that by now you have understood that what should be there in a best shower valve. I have also given reviews on some of the most popular and effective shower valves in the market. I really hope that it would be of great help to you. Because the buying guide I provided you that will help you to choose the perfect and best shower valve for you.