Why Does Toilet Whistles When Flushed

The plumbing system of our home is very important to us because it plays a very integral part in our everyday lives.

However, it often happens that the toilet whistles when flushed and it is very irritating. At the same time, it can wreak havoc on your sanity in the middle of the night. It is a common fact that most of the plumbing systems will make noise.

The sounds of water dripping or traveling through plumbing pipes has become a normal occurrence to us and it is quite annoying to hear the shrieking sounds of a whistling toilet.

That’s not it, it is also a sign that you do have a problem with your toilet tank fill valve. 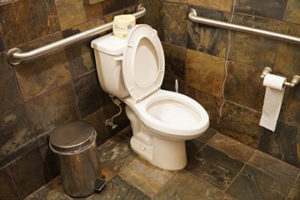 A toilet tank is basically the vessel on the back of your toilet that holds water which is used for flushing. A device named fill valve is used to fit it. When you have flushed the toilet for once, it is the fill valve which regulates the amount of water that enters the tank.

It is fitted with another instrument called float that rises and falls according to the water level inside the tank.

Whenever the float falls, it opens the valve and it also allows the tank to fill. On the other hand, when the float reaches a preset level, the valve closes and it shuts off the water entering the tank.

What is the reason behind a Whistling Toilet?

Whenever you hear a toilet whistling after you flush it or randomly during the night then you should know that this is because of a faulty fill valve. With the passage of time, the internal parts of fill valve deteriorate and this results in the whistling, hissing sounds.

Most of the people face this problem. A faulty fill valve can also cause the entire device to vibrate and this leads to all sorts of strange noises.

What should we do to Eliminate Toilet Whistle?

When a fill valve is screaming for your attention through the whistle, it means that the fill has some imminent failure and it should be replaced. Sometimes a simple adjustment leads to the elimination of the noise but once the toilet starts screaming, it is only a matter of time before the fill valve fails completely.

If you ignore these little problems then gradually it will turn into a big one. If you ignore the annoying noise from a faulty fill valve then you could be subjected to increased water usage which will result in higher utility bills. If a fill valve fails and it continues to run in this situation then it can waste up to thousands of gallons of water per year. To solve the problem fill valve replacement is the must.

Although fill valve replacement seems like a simple repair yet you should keep in mind that if It is not installed properly then it could cost you thousands of dollars in-home repairs because of water damage from an overflowing or leaking toilet.

So in order to save thousands of dollars, you should get a new toilet fill valve and call a professional to install it.